The Oceanographic Research Vessel Hespérides reaches 31 years old since it touched the sea for the first time.

31 years ago, on March 12, 1990 in the shipyards of the Spanish Navy base in Cartagena, the first spanish Oceanographic Research Vessel (BIO) was launched, the A-33, better known as the Hespérides.

This is a global research vessel. Its laboratories and tools allow it to carry out work in the fields of geology, marine geophysics, hydrography, physical and chemical oceanography, marine biology and the monitoring of the different oceans. In its early work, it participated in magnetometry, gravimetry, hydrography and seismic research. Being the only Spanish ship designed to carry out multidisciplinary scientific research in all the seas and oceans of the world, especially in the Arctic and Antarctica for its reinforced hull to withstand the climatic conditions of the area during the northern and southern summers respectively. This makes it the first Spanish ship to carry out scientific campaigns in both Glacial Oceans, fulfilling it in 2007 with the celebration of the International Polar Year carried out by the UN.

Regarding its name, it refers to the tree of science that is present as an allegory in the logo of the CSIC (Higher Council for Scientific Research, “Consejo Superior de Investigaciones Científicas” in spanish), at the same time as the Hesperides, which in Greek mythology were the nymphs who cared for a wonderful garden with golden fruit trees that stood on the edge of the ocean that encircled the world. Being this place in the south of the Iberian Peninsula. In December 1988 it began construction at the Bazán shipyards. Two years later, it was launched, having Queen Sofía as godmother and in the presence of King Juan Carlos I. A year later, on May 16, 1991, it was handed over to the Navy. In that same year, it carried out her first campaign in Antarctica. That summer, she conducted its first hydrographic surveys on Media Luna Island. In 1992, the BIO Hespérides continued carrying out bathymetric surveys on Decepción Island and studies in volcanology, magnetometry, gravimetry and seismic, serving as logistical support to the Spanish Antarctic Bases (BAE) located at the South Pole, Gabriel de Castilla and Juan Carlos I. It was also part of the Malaspina Expedition in 2010 in which it circumnavigated the entire globe, this being its first round the world.

To date, the ship has continued to carry out extensive work both in southern lands and seas, as well as research carried out by Spanish scientific organizations and institutions at a national and international level, making known the ability of the Spanish Navy to carry out operations in any sea and ocean on the planet.

From 1991 to 2018, the Hespérides carried out a total of 23 Antarctic campaigns and its functions span all the oceans of the planet, supporting all kinds of scientific campaigns. Since then, the ship has collaborated with more than 140 research projects and more than 800 scientists have passed through these, traveling the equivalent of 10 times around the globe.

In one of these expeditions, Dr. Josep Lluís Pelegrí aboard the Hespérides pointed out “The ocean is a box of surprises, the more you know it, the newer things you find”. 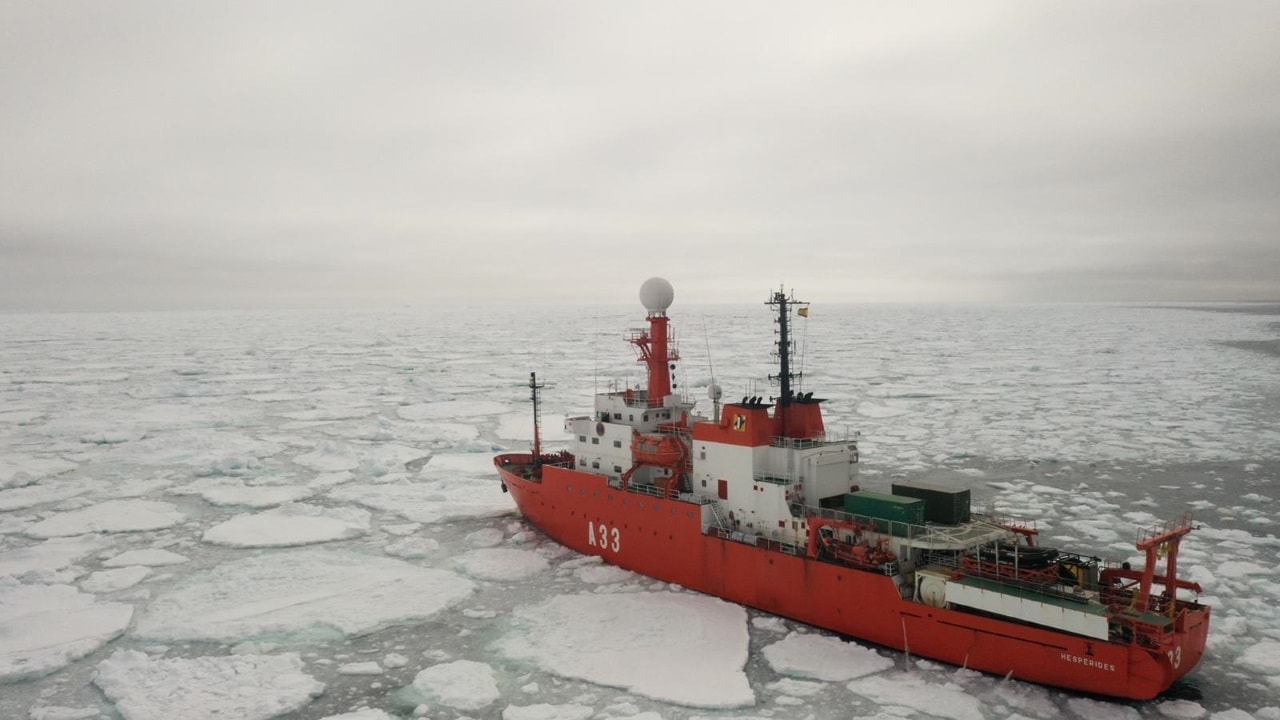 The Hesperides crossing the most hostile waters on Earth. Photo Credit: Xavier Fonseca