Storms and droughts: the consequences of the El Niño phenomenon

The air is warmer, and so are the oceans, so the storms that form in this environment are different than they were before. Photo Credit: Jonathan Bachman / Reuters

El Niño is a meteorological phenomenon that occurs on the surface of the Pacific Ocean in the Central-Eastern zone along the Equator and consists of the warming of this above the usual.

Normally, the trade winds of the region blow from east to west, carrying the warm waters of the surface away from South America, being replaced by waters of colder temperatures.

When El Niño is generated, in periods ranging from three to seven years, the winds weaken and cause warm waters to accumulate along the sea surface of the west coast of South America. Although this phenomenon occurs and modifies the climatic conditions of the Equatorial Pacific, it also collaterally affects other parts of the planet.

The main effects of El Niño are to modify the climatic conditions in two variables that vary depending on the other: the levels of humidity and rainfall and periods of drought. For example: while on the east coast of Asia rainfall is reduced to the point of reaching droughts, on the west coast of South America and Central America there would be more humid climates and with stronger periods of rain, which would also have as consequence droughts on the east coast of the continent. At the same time that some areas are flooded by rain, others dry out due to excess heat. 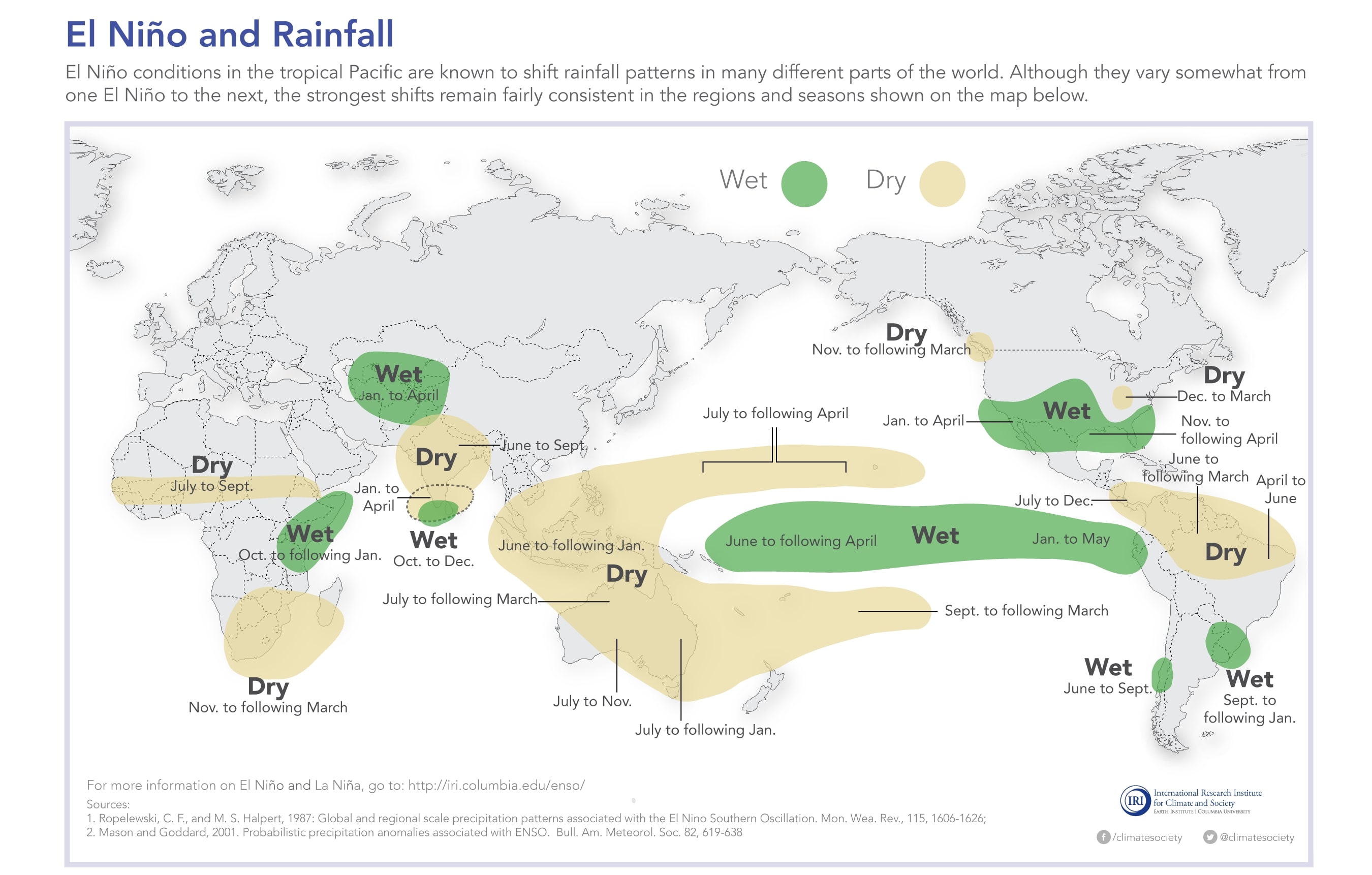 El Niño conditions in the tropical Pacific are known to shift rainfall patterns in many different parts of the world. Photo Credit: International Research Institute for Climate and Society

These meteorological changes affect tropical cyclonic activity, causing a great impact on industries such as fishing, agriculture and marine fauna and flora along with the coast. Not counting the increase in the average temperature of the planet’s atmosphere.

El Niño is a stage of the meteorological pattern known as ENSO (El Niño – Southern Oscillation) that leads to changes in temperature that are colder or hotter in the Pacific of between 1 ° C and 3 ° C compared to normal temperatures.

This pattern is comprised of three stages: Neutral, which presents the average parameters; El Niño when the Pacific surface warms; and its counterpart La Niña, which consists of the opposite effect. This cools the surface of the Pacific and reverses its effects, causing more rainfall in East Asia and greater droughts in America.

These two are the most extreme phases of the ENSO cycle, being able to influence the climate at global levels.

Although these phenomena have been studied previously, in recent history no two El Niño have been the same due to the existence of many more factors that can affect the evolution of the phenomenon.

Then the IMO (World Meteorological Organization) presented an explanatory video on El Niño for the years 2015-2016.